When it comes to search engine optimization and event promotion, simple things can have big impact. Search Engine Marketing is critical in your event marketing and promotion efforts. Check out "Leveraging Your Event Promotion with SEO." One easy SEO improvement, with a high level of impact, is crafting a compelling description tag. The description tag is used to tell an internet searcher what a particular page is all about. Each page on your event web site should have its’ own unique description tag.

An Example
Below is a shameless self-promotion example. The section highlighted in Red is the description tag.

If They’re Searching - They’re at Least Curious About Your Event
Keep this in mind when writing a description tag . . . Most people searching for your event web site are at least curious about your event.  When is the last time you used a search engine to look up something of no interest to you?  If a searcher finds a search listing for your web site in the search engine you want them to click on your link, not the competitions. A strong description tags helps in getting people to click on your web site link.

A Bad Example
Here is an example of a bad or inaccurate description tag for an event or business. It gives the reader almost no incentive to click. Be sure you're not making the same mistake.

Posted at 10:04 in Event Promotion and Marketing | Permalink | Comments (1) 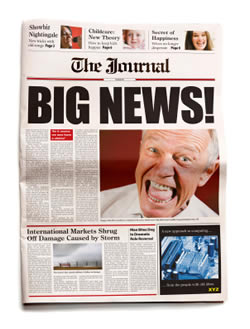 Leveraging Your Event Promotion with SEO

Search engine optimization is a critical part of your event marketing and promotion, especially if you have a recurring event. A properly optimized web site can drive tons of free traffic to your event web site. The more qualified people you have coming to your site the higher the user’s attention level.  Let’s face it . . . someone searching for “underwater basket weaving” isn’t going to show up to an air show event web site. A proper search engine strategy can also allow you to leverage your traditional marketing campaigns.  What’s more interesting is the interaction of search engine marketing with traditional advertising and promotion.

Here is a real life case study to consider. The event organizer spent in excess of $100,000 USD to advertise their local event. Their traditional advertising efforts included television, print, radio, and billboards. The brunt of their campaign started 30 days before the event date. For all of the money spent on traditional advertising, almost 50% of the traffic came as a result of search engine traffic. You can see a break down of the information below.

The graph above illustrates the importance that search engine optimization plays in your event marketing strategy. What’s even more interesting is that only about 28% of the traffic was a result of people directly typing in the domain name into the address bar. The event organizer put a tremendous amount of focus on driving people to the web site with their traditional advertising.  Additionally, the domain name for the event web site was very easy to remember. Yet, a majority of the people used the search engines to find the web site.

Below are some short articles to help you with search engine optimization ideas for your event web site.

Lost Opportunity - Seemingly Irrelevant Search Keywords . . .
Your event prospects aren’t always using obvious search terms to get to your web site. Check your web stats and see if you’re missing a search engine optimization opportunity.  One event planner that I recently started work with discovered that a large number of people were searching on a significant keyword that the event planner considered irrelevant. Seemingly irrelevant keywords are a huge opportunity cost. Make sure you optimize your web site for some of the valuable, yet obvious terms.

Your search engine optimization strategy is a crucial part of your overall event marketing and promotion strategy. If done properly, a well thought out search marketing strategy can significantly increase the effectiveness of all your traditional marketing.

Posted at 10:51 in Event Promotion and Marketing | Permalink | Comments (0)