Staying Above the Fold
Get A Free Event Marketing Education 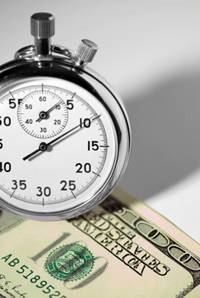 A few years ago the average attention span for a web user was about 8 seconds.  Your site had to load in those few seconds or else you potentially lost a user.  That was during the "covered wagon" days of the Internet.  With more people getting broadband access the playing field is changing yet again.

A recent study conducted by Akamai Technologies found that a user's online attention span is getting even shorter.  Over 1,000 web users were surveyed.  They found if a shopping web site took longer than 4 seconds to load, 75% of the participants would not return to the site.   The study also found that 30% of the user's formed a negative perception about organizations with poorly designed web sites.  Some of the top complaints included poor navigation and a long checkout process.

If you are looking to build an e-commerce site study the top online retail sites.  I know many people criticize Amazon.com for being too simplistic.  The Amazon site is almost entirely text based.  The navigation is simple and they leverage their search feature.  Over the years they have added additional features but remained true to their original design.  Their original design works.  If you go through some online retail sites you'll notice a number of similarities.  Integrate those similarities into your site and keep it simple.

Too many web sites pack their pages with irrelevant content that slow web site load times. You need to grab the user's attention and keep it.  Give them a reason to come back in the future. Don't forget that there are people who still use dial up service. Make sure your site is mean and lean.  When is the last time you heard someone complain about an easy to use web site that loads too quickly?

You hit the nail on the head. Load time killing 75% of traffic is devastating to any web property. CDN network is a must!